How To: Stop leaking, popping and spitting

Leaking, popping, spitting. It’s all part of vaping, right? It doesn’t have to be that way. There are plenty of things you can do to keep these issues to a minimum. Whether you’re using a regular tank or rebuildable atomizer, these tips will ensure a smooth experience — no matter which type of device you have.

There’s nothing worse than spilling your favorite e-juice all over your hands. Recently, manufacturers have been redesigning some of their more recent tanks to combat leaking and other annoying issues like hot pops and spitback. No matter what type of device you have, here’s what you can do to fix it now. 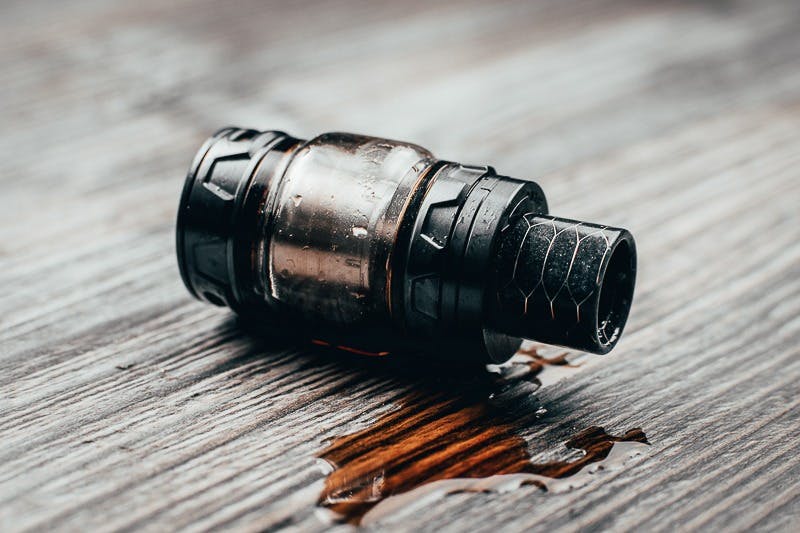 Leaking happens when e-juice escapes from your tank, usually through the airflow system. Depending on the reason behind it, leaking can range from a few drops of e-liquid, to having your tank emptying all of its contents all over your vape mod. It’s a common problem with even the most popular sub ohm tanks. Best sellers of previous years, like the SMOK TFV8 Baby Beast, Uwell Crown III, Sense Herakles and the Aspire Cleito, have been troubling vapers with leaking due to design oversights or common user errors.

While there are a few common culprits, the good news is that there are ways to prevent leaking from happening. First, we will start with some general tips, and then go into more depth depending on the device you’re using.

How to prevent leaking 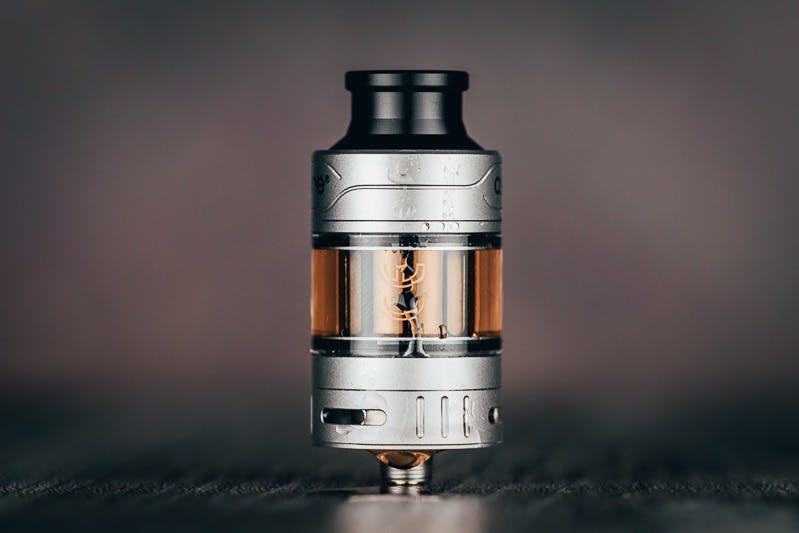 Check your seal – It sounds obvious, but make sure your tank is fastened together properly. Sometimes if you’re in a hurry, you may cross-thread the top cap or forget to screw it together tight enough. This can cause juice to leak out of the openings. First make sure the threads are in sync and closed tightly, but not too tight. Find that sweet spot. If the threads are crossed, screw it back together carefully.

Remove e-juice from chimney – All tanks have a central airflow tube that runs from the body of the tank up to the drip tip, known as the chimney. Sometimes you can get e-juice inside this tube by accident, which usually leads to gurgling and leaking. If this happens to you, clean it out with a paper towel before vaping.

Keep your tank upright – Some tanks aren’t built to handle being on their side for long periods of time. E-liquid can start seeping out through the airflow holes if you leave it that way overnight. Try to keep your vape positioned vertically if you’re not using it for extended periods of time. Don’t get into the habit of laying your device down all the time, or you will have to deal with inevitable leakage.

Check for worn or damaged O-rings – A common cause of leaks. Take apart your tank, remove the O-rings and examine them closely. Look for signs of wear and tear, broken or missing O-rings. These things can compromise the air seal of the tank. Thankfully O-rings are cheap, just make sure you get the right size. 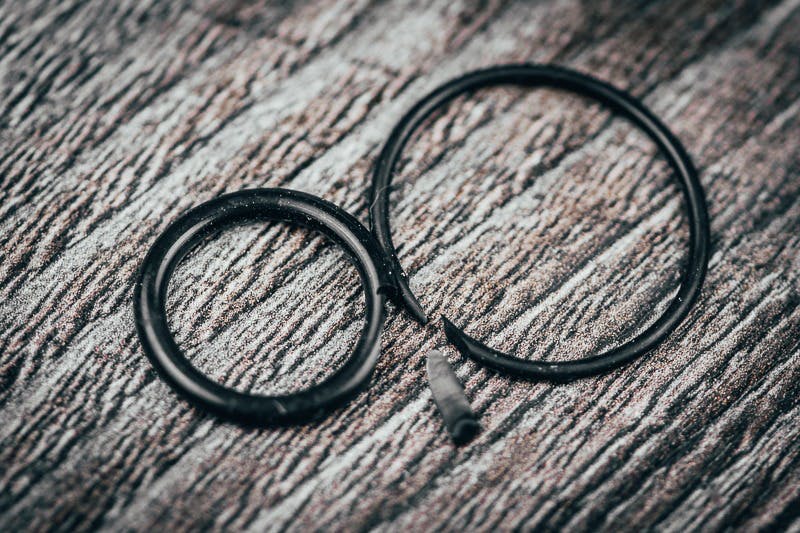 Put a lid on it – If you leave a tank without the top cap, it will leak out of the airflow holes. That’s due to the pressurized nature of tanks. Make sure that your tank is empty if you plan on leaving your top cap off for extended periods of time — anything longer than it takes to fill it. Closing the airflow off will work too, but it’s not as foolproof.

Check your airflow – Always make sure the airflow holes are fully closed when filling. When in use, make sure the airflow is open enough to allow you to vape without having to take strong inhales. If you inhale too forcefully, you risk bringing too much e-liquid into the coil, which may lead to leakage

Watch out when filling – Never overfill your tank. Always leave a small air pocket at the top when filling. This empty space will help prevent any liquid from leaking out.

Check for cracks – Check your tank for cracks or other damage. A thin crack in the glass or a piece of bent metal can mean the tank is no longer airtight, allowing the juice to leak out and into the air hole valve. If your glass is cracked it is usually an inexpensive and simple solution to buy a replacement.

Use the right e-juice – For coil heads that require a lot of power, anything lower than 70% VG stands a good chance of leaking due to the thin viscosity of PG. A good rule of thumb is the big cloud-chucking devices do well with 70% VG (only 30% PG) and above, and MTL devices are generally good up to 70% VG. Always look at your e-juice label to determine its PG/VG ratio. 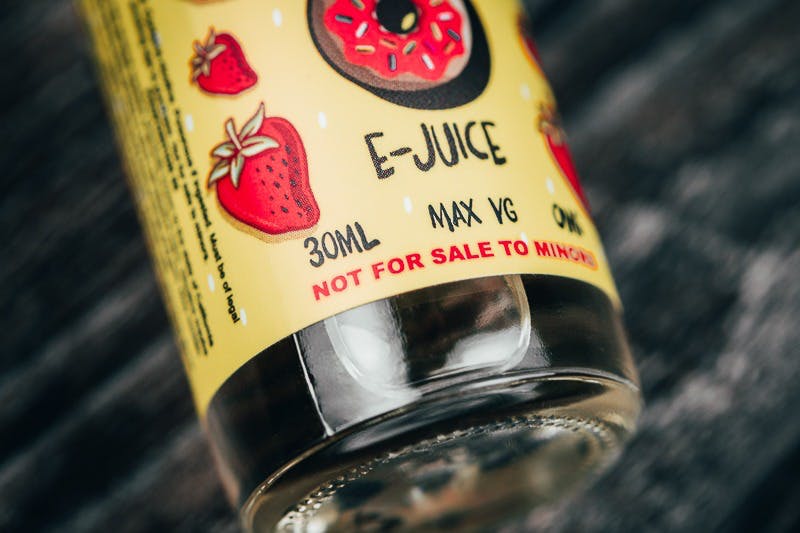 Check your coil heads – As with most mass-produced products, there will always be a few duds. In some cases, the coil may have manufacturing flaws that stop it from holding the juice properly, causing the tank to leak. First, ensure your coil head is screwed in properly and if it is, simply replace the coil–preferably with one from a different batch to the one you’re currently using. If the problem remains, the complication is likely down to one of the other issues addressed here.

Wick carefully – This only applies to rebuildable atomizers that require you to wick them yourself. Wicking an RTA can be tricky: make sure to use enough cotton, or you will be at risk for leaking. The goal is to tuck the cotton in to the wick ports without stuffing them in. This could take some trial and error, depending on the atomizer you are using.

What is spitting and popping? 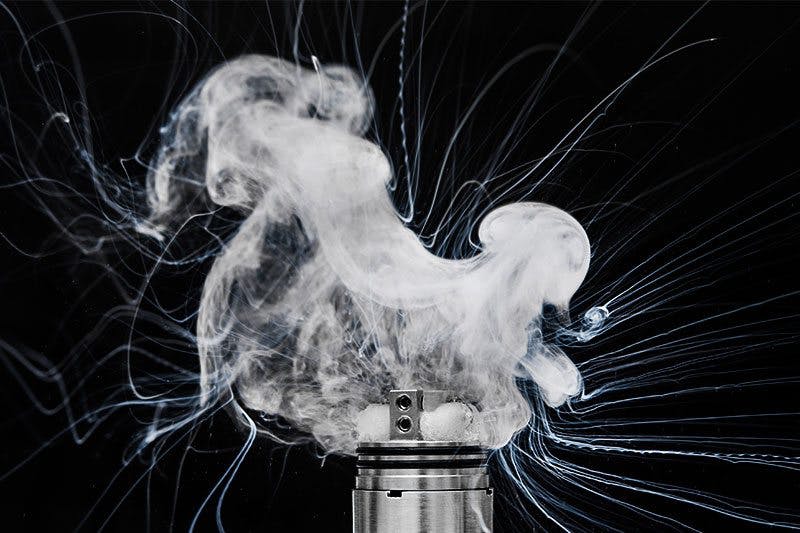 Spitting, or spitback, is the name for the occasional super-hot droplets of e-liquid that shoot in your mouth when you’re vaping. If you watch an RDA coil firing, you can sometimes see this happening, usually accompanied by popping sounds. The droplets spit in all directions, but if you’re unlucky, some of them can shoot up into the mouthpiece.

Spitback has a simple cause: e-liquid gets pooled up on the coil itself and gets “cooked” instead of being vaporized. It spits similar to the way boiling water does, and with you inhaling from the tip, you can easily catch a droplet or two. The problem is closely linked to flooded coils, but, in some cases, it can happen even without flooding. Here are some ways to prevent spitting and popping from occurring.

How to prevent spitting and popping 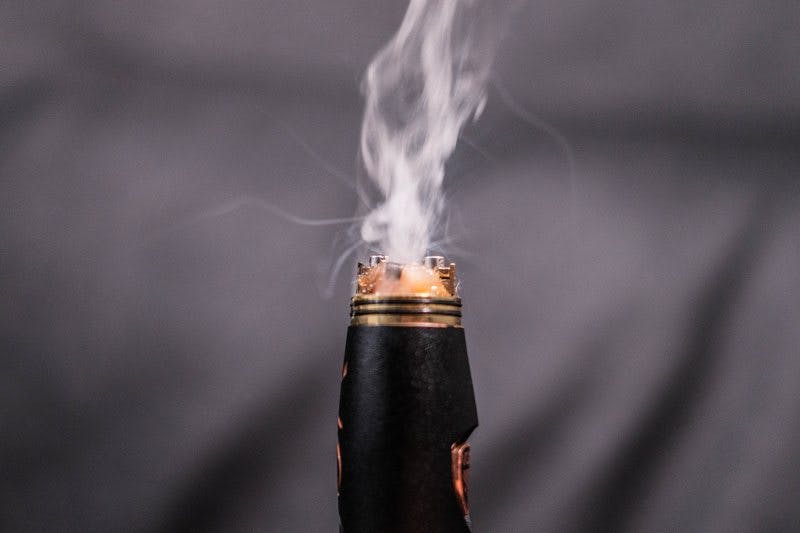 Don’t over-prime your coil – “Priming” your coil is the process of manually dripping e-juice onto the wicks before you first use it. If you put too much e-juice in the chamber, you can easily cause flooding issues and spitback. Don’t overdo it. Find your balance. It’s better to give the cotton time to saturate rather than rushing the process.

Reduce your airflow – Inhaling too forcefully when you vape encourages flooding by literally pulling more e-juice into the chamber. This is easy to solve: inhale more softly, letting the coil and wicking do the work for you. If you’re still having issues, try reducing your airflow setting. However, if you reduce the airflow, be careful not to inhale too strongly to compensate – this could just make the issue worse. 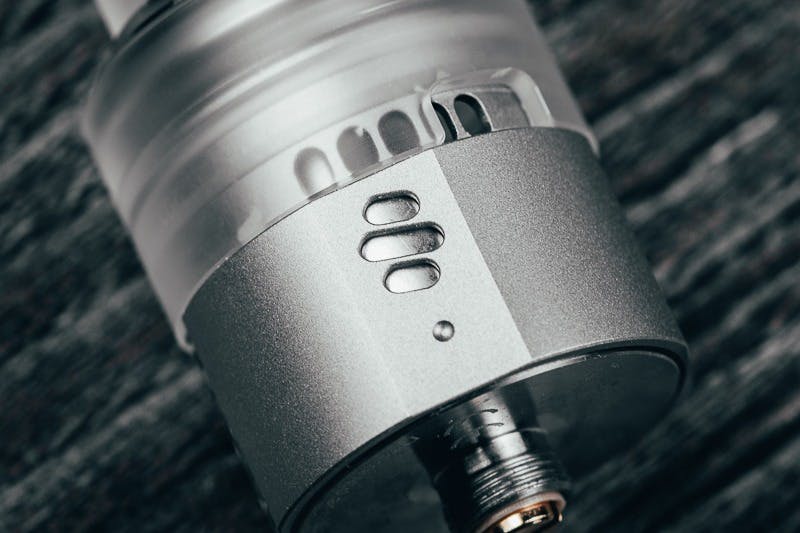 Use thicker e-juice – PG is thinner in consistency than VG. This means that high-PG e-juices are more likely to flood an atomizer than high-VG ones. If you’re having spitback issues, changing to a high-VG e-juice can solve the problem by slowing down your wicking.

Pulse the fire button – If you’ve primed or dripped too much – just pulse the fire button a couple of times before you start to inhale. The popping sounds should fade, leaving the ordinary, white noise-like hum of vaporization. At this point, you can puff away without fear of spitback.

Turn up the power – If your wattage is too low, you might not be vaporizing e-liquid as quickly as your wick is supplying it. Try going up by 5-10 watts if you’re using a variable wattage mod.

Try another drip tip – If you have a 510 drip tip, try an anti-spitback drip tip. Angled designs make it harder for e-juice to spit all the way up into your mouth. Longer drip tips – especially if they’re curved or have a bend in them – solve the issue in the same way. You can also try fitting a screen onto the bottom of your drip tip or finding one designed for.

Clean the chimney – Although flooding is the most common cause of spitback, the problem can also be made worse by e-juice collecting in the chimney which eventually makes its way back down to your coil. This can be fixed easily: get some rolled up tissue paper, remove your drip tip and insert it down into the chimney of your tank. This soaks up the excess e-liquid reducing the chance of spitting and popping. 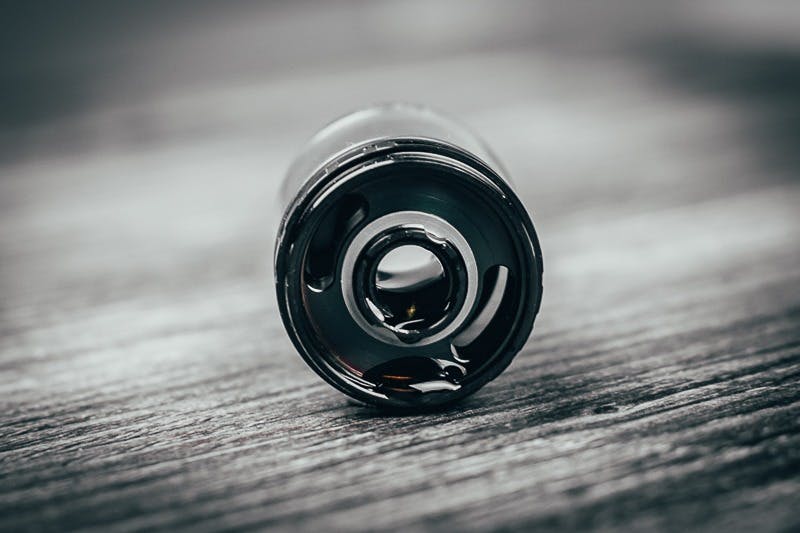 Avoid exotic coils – This applies mainly to rebuildables. Multi-strand coils often pop and spit due to their design. Twisted coils in particular have a bad reputation for this, but Clapton coils may have the same issue. Their design makes it easier for e-liquid to pool on the coil, and so sometimes it’s hard to entirely avoid popping on these coil types. The easiest advice if you absolutely want to avoid spitback is using simple round wire instead.

Fix your wicks – If you’re using an RTA and spitback is a problem, you may need to re-wick your coils. It might take some experimenting, but the aim is to cover the channels leading from the tank to the chamber without completely blocking them with densely-packed wick. If you’re having issues with flooding and spitting, you’ll need to use more wick than you usually do, but don’t use too much.

Sometimes troubleshooting is necessary for a smooth experience. There are so many causes for leaking, spitback and hot pops – but they’re very avoidable. Start with the simple solutions first, and if they don’t work, move on to more drastic measures. If all else fails, you might need a whole new tank altogether.

It’s good to know that manufacturers are waking up to these common problems. As anti-spitback and anti-leaking measures become more widespread, we may be entering a new age of vaping. If the tech keeps progressing, problems like these might become a thing of the past someday. In the meantime, don’t let these inconveniences deter you from enjoying a much better alternative to smoking cigarettes.

Are you over the age of 18?
By Law, we require all our customers to submit some form of Identification PRIOR to shipment of your order.
Have you submitted your Identification for Over 18 Verification purposes?
Please do so now from your Account > Identification